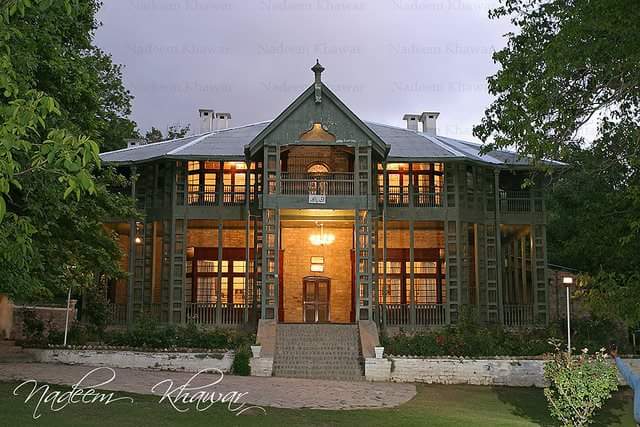 Quaid-e-Azam Residency stands aloft and glorifyingly with all its significant splendeur. Its beauty reflects from its lush green lawns, Chinar trees and flowery-fragrant surroundings of the Ziarat valley of Balochistan. It is an historical place because of the stay of founder of Pakistan, Quaid-e-Azam Muhammad Ali Jinnah during the last days of his life in the illness. Al the valuable belongings of the Father of the Nation exhibits there. The Residency, built in 1882, by the British Government, initially used as the summer headquarters for the officials. Hazarganji Chiltan National Park stretches in the outskirts of Quetta. It lies in Mastung District and just 20 kilometres (12 miles) away, in the South-Western side of the Quetta city. The park is in the Sulaiman Mountain Range. It is basically established for the protection and preservation of the endangered species of Markhor and Wild Goat. Total area of the park is 32,500 acres and its altitude is between 2,021 to 3,264 metres above sea level. The word “Hazarganji” actually means “of a thousand treasures”.

Hanna lake is 10 kilometres away from Quetta. It locates at the opening of Urak valley of Balochistan. The lake is home of the delicious Golden fish. The sophisticated touch of its greenish-blue water which exhibits an exotic and unique look, with the backdrop of the brown sandy hills of Balochistan. Pine trees give a spectacular scenery along with the lush-green slopes and to the banks of the lake, whereas promenading is a pleasant experience. Transport and accommodation facilities are easily available. Quetta is in the Balochistan Province of Pakistan. It is at the opening of the Bolan Pass. Its elevation is 1,680 metres (5,512 feet) above sea level. “Quetta” is a word from Pashto language and derives from “Kuwatah” or “Kot” which stands for a “fortress”. It relates to the four surrounding snowy hills, Chiltan, Takatu, Zarghoon and Murdaar, which encircle the city like a ring. Quetta locates at an elevation of 1,680 meters (5,510 feet) above sea level which makes it one of the high-altitude major cities of Pakitan.

Since it lies in the North-Western side of Balochistan, hence it is near the Pak-Afghan. Quetta is in fact a trade centre between the two countries. Bolan Pass is the only route from Quetta which was once the only gateway for connecting Central Asia to South Asia. Quetta is the provicial capital of Balochistan and it is the 9th-largest city of Pakistan. The city is called as the “fruit garden of Pakistan” because there are a number of fruit orchards in and around the area. It produces a variety of fruits and dry fruits. The city was once famous as mini Paris, due to its enchanting beauty and geographical location. This area is blessed with green pastures and mountains. There are so much variety of plants and animals.

Ziarat is about 125 kilometers (78 miles) away from Quetta. Its altitude is 2,697 metres (8,448 feet) above sea level. Ziarat is a summer holiday resort and it was once the summer residence of the chief commissioner of Balochistan. It remained as a sanatorium for the European troops. There lies one of the oldest forests of the world, which is called as Juniper Jungle. Some trees of the forest are as old as 5000 years ago. Ziarat means the ‘Shrine’ and it is a resting place of a sufi Saint, Kharwari Baba. The Shrine is 10 kilometers (6 miles) away from Ziarat. Its highest point is the Khilafat Hills, with an elevation of 11,400 feet (3,475 metres) above sea level. The apple of Ziarat is famous for its variety and unique taste.