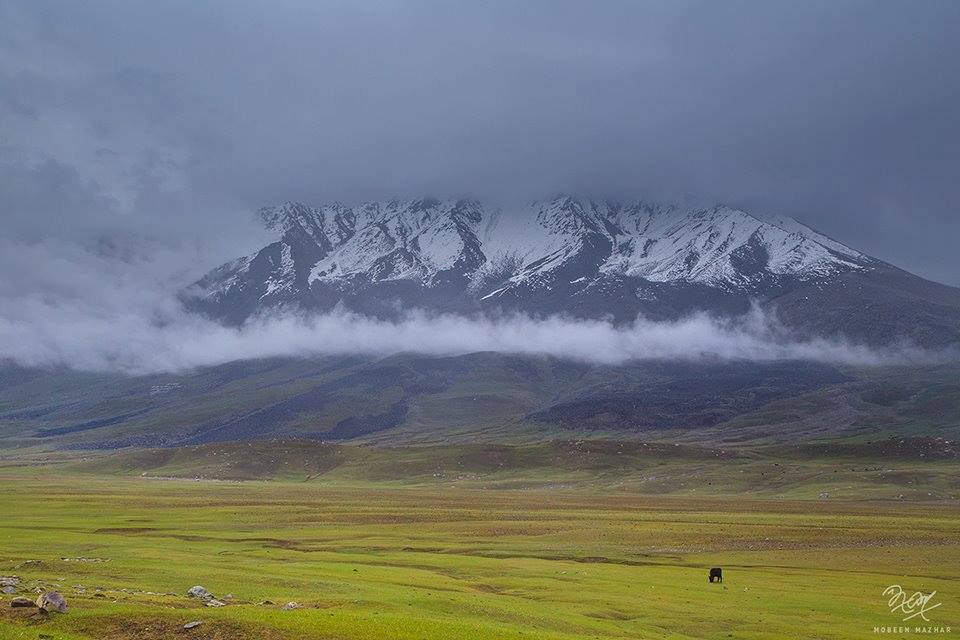 Shandur is the ‘Roof of the World’ because of its high altitude of 12,200 feet (3,700 metres) above sea level. The top consists of flat plateau and accessible between late April till early November. There is a boundary line between Khyber Pakhtunkhwa (Chitral District) and Gilgit-Baltistan (Ghizer District) on Shandur Top in Punji-Lasht.

Shandur Polo Festival is a big attraction for the tourists. Tourism Corporation of Khyber Pakhtunkhwa (TCKP) organizes it every year and the significance of the Festival is a Polo match. The teams of Chitral District and Gilgit District play it on the highest Polo ground of the world, the Shandur Polo Ground.

Polo was introduced in South Asia, by the Muslim conquerors in the 13th century. ‘Polo” is in fact a Balti word, which means “ball”. In 1935, a UK Administrator for Northern Areas, Evelyn Hey Cobb ordered Niat Qabool Hayat Kakakhel to construct a Polo Ground in Shandur and he sought the help of the people of Laspur, Chitral in this regard.

The Polo Ground was given the name as “Mas Junali” or Moony Polo Ground. The word “Mas Junali” is derived from Khowar language; “Mas” means moon and “Junali” means Polo Ground. Cobb was so impressed by efforts of Kakakhel that he wished to give him a reward for his services. But Kakakhel declined any reward for himself; instead he asked Cobb to stock the trout in the local streams. Cobb ordered live trout from England and dropped them into the River Ghizer. The Directorate of Fisheries had been established and hundreds of people got employment, hence Gilgit-Baltistan becomes a fishing hub.

The Balti Raja of Skardu, Ali Sher Khan Anchan has built the Shandur Polo Ground.  Initially it was a training centre for cavalry units of the King’s Guards and other Elite troops, as a warlike game. It becomes Persian National Game in the 6th century AD. The game extended to Arabia, Tibet, China and Japan, from Persia. Chinese King Apaochi ordered the beheading of all Polo players, on the death of his favourite relative in the game, in the year 910. Ali Sher Khan Anchan Maqpoun used to play Polo at Shandur, when Chitral was a part of the Maqpoun Empire.

The traditional Polo Tournament at Shandur has been a continuous annual feature of the Shandur Festival since 1936. It is held in the first week of July, on Shandur Top, at 3,700 metres, whereas the elevation of the Top is 3,800 metres, above sea level. The festival comprises of Folk music, dancing and camping at the village. Teams of Chitral and Gilgit-Baltistan play the game of Polo, which is the immediate form of the original game. The British were the patrons of this game in India and Pakistan, in the 20th century. A large number of visitors attend the traditional Polo Tournament from 7th to 9th July.

During the Shandur Festival, a tourist tent village is being set up, with all the essential amenities of life. Merchants from Peshawar, Chitral and Gilgit set up their Kiosks of souvenirs and handicrafts.

Pakistan Tourism Development Corporation (PTDC) Motels are available at Panah Kot, Dir, Chitral, Bamburet (Kalash Valley), Besham (KKH), Barseen (KKH) and Gilgit. There are many private Hotels and Guest Houses as well. Besides it, the tent village on the Shandur Top has all the facilities.

Previous: Traditional Cuisines of Gilgit-Baltistan, Pakistan
Next: CHITRAL – THE LAND OF POLO