Templates by BIGtheme NET
Home » Kashmir » My City – My Muzaffarabad 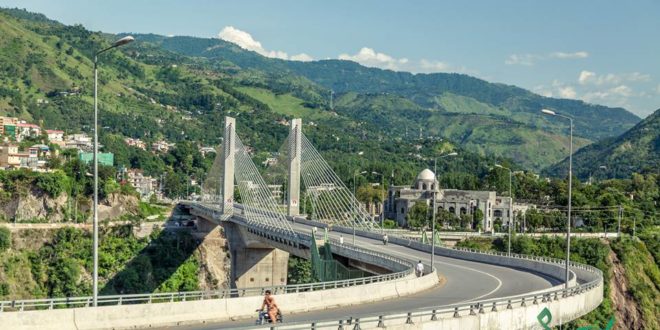 My City – My Muzaffarabad

Though I born in Hattian Bala (Jhelum Valley District), yet I live in Muzaffarabad all my life till date. I owe it more than my hometown, because I grew older here, get my schooling, then went to the college and got University education in the same city. Muzaffarabad is a city of Saints and legendry people. Its ancient name was Udabhanda, which was mentioned in the travelogue of Hiuen Tsang, who was a Buddhist Pilgrim and visited the valley in the year 633 A.D. Another name of Muzaffarabad was Chikrri Behk. Bomba Sultan Muzaffar Khan designated it as his capital. Udabhanda (Muzaffarabad) remained the capital of the Shahi (Devanasgari) Dynasty as well. This Dynasty ruled over some of the parts of Eastern Afghanistan and a Province of ancient Gandhara Civilization (Northern areas of Pakistan, including Kashmir valley) from the 3rd century to the early 9th century, after the downfall of the Kushan Empire. It was called as Kabul-Shahan or Ratbel-Shahan (565 – 670 CE) Dynasty. Kapisa and Kabul were the capitals of the Dynasty respectively; but afterwards Udabhandapura (also Hund) was designated as the new capital of the Shahi Dynasty. It remained the capital until the downfall of the Empire.

Muzaffarabad remains a highly significant city, throughout its entire history until the current day. It is a multi-ethnic and multi-religious part of the state of Kashmir; people live in the Ethno-Religious harmony. Tourists can observe the historical background of the city through its architecture; especially the remains Hindu temples, Red Fort, Black Fort and Jalalabad Garden, which manifest the glory from the past.

The city was accessible even in the ancient times. The caravans of merchants and preachers came from all over the contiguous Empires, like the sub-continent, the Central Asia and Afghanistan, through the Srinagar-Muzaffarabad Road. The road is still in excellent condition and links Azad Kashmir to the Kashmir Valley through Srinagar-Muzaffarabad Bus Service.

Khyber-Pakhtunkhwa is in the West of Muzaffarabad, Jhelum Valley District is in the East of it, whereas Kupwara and Baramulla districts of disputed territory of Kashmir are in the East of the Jhelum Valley District, linked via Srinagar-Muzaffarabad Bus Service. Furthermore Neelum District of Azad Kashmir is in the North of Muzaffarabad. It is a beautiful city and a popular tourist resort of Azad Kashmir, its elevation is 737 meters above sea level. The confluence of the two rivers Jhelum and Neelum, give it a spectacular look. The cold bluish water of the River Neelum mixes up with noisy, rapturous, sturdy and greenish water of the River Jhelum at Domail.

The journey takes 3 hours from Islamabad, through Murree Expressway. Kohala is the entry point to Azad Kashmir. After Murree the road becomes thin and winding as well as very scenic. It takes 2 hours to reach at Kohala Bridge and an hour to Muzaffarabad from Kohala.

The other route to reach Muzaffarabad is;

The climate of Muzaffarabad remains mostly pleasant. The summers are mildly hot while the winters are chilly with plenty of snowfall. The ideal time to visit the city is during the autumn season when the skies are clear and the weather condition excellent. Muzaffarabad is full of idyllic areas which add to the charm of the place. River Neelum plays a vital role in keeping the climate of Muzaffarabad enjoyable and pleasing. Neelum joins Jhelum near Domail.

The Two Forts of Muzaffarabad:

These two historical Forts are on the opposite sides of the River Neelum, and popularly known as the Red Fort and the Black Fort. The Mughals built the Black Fort along the bank of River Neelum. It remained under control of Army and Police Force. It is abandoned to the visitors.

Sultan Muzaffar Khan completed the construction of the Red Fort in 1646. Afterwards the Mughals took over Kashmir and the Fort lost all its significance, because they were interested in Kabul, Bukhara, and Badakshan rather than Kashmir. The Fort regains its glory during the reign of Durrani Dynasty. Dogra rulers Maharaja Gulab Singh and Rambir Singh reconstructed and gave it extension, because of their political and military needs. When the Dogra Forces left the area in the mid of 1947, the Fort lay abandoned behind them.

The architecture of the Fort shows the expertise of designing and structural skills. River Neelum surrounds it from three sides. On the Northern side, there are terraces of the Fort, which are accessible through steps, leading to the bank of the river. The Eastern side gives protection from the menace of floods. Some parts on the Northern side got damaged. There used to be an Inn, at the entrance of the Fort, but now one can see only traces of the remains.

Azad Kashmir has its own Flag, National Anthem, President, Prime Minister and Supreme Court. The Legislative Assembly is a unicameral legislature of elected representatives from the Pakistan Administered State of Azad Kashmir. Members are elected by the votes of the people of Azad Kashmir and refugees from Kashmir valley and Jammu, living in Pakistan.

The assembly consists of 41 elected Members and 8 co-opted members, elected by the Assembly members; of whom 5 are woman, a member for Ulema Community, a technocrat, and a seat for expatriate Kashmiris. The Supreme Court is the highest Court of appeal in Azad Kashmir. It consists of a Chief Justice and two Justices. The AJK High Court acts as a court of appeals as well.

Naluchi Bridge r Earthquake Memorial Bridge is the first Extradosed Bridge of Pakistan. It was built after the earthquake of October 8, 2005. It was an extension in the concept of rebuilding the Muzaffarabad city, in which the “West Bank Bypass Construction Project” had very high priority. The project included the construction of a new bypass in Western Muzaffarabad to relieve the traffic congestion of the city.

Along the 5 kilometres long road from Naluchi to Chela Bandi, a bridge was built across the Jhelum River. Naluchi Bridge is the highest bride of Pakistan, with its centrally located, 60m high pylon. It is 473 metres long, which includes a 246 metres long main Extradosed bridge leading across the river; as well as 59 metres long Eastern and 168 metres long Western Ramp.

Pearl Continental Hotel or PC is a beautiful hotel on a hill-top in Muzaffarabad which is the capital city of Azad Kashmir. It has a wonderful landscape with green pastures and hilly areas all around. Being a junction of two rivers Neelum and Jhelum, the city is a perfect place to visit. When the blue icy-chilled water of river Neelum meets with roaring and aggressive green water of river Jhelum, it creates mesmerizing view. Muzaffarabad as a capital of Azad Kashmir is the hub of social, political art and craft activities since centuries. It is an old city often calls the city of saints and prominent figures.

Football, Cricket and volleyball are the most popular games in Muzaffarabad. Tournaments are held throughout the year and especially in the holy month of Ramadan. The floodlit tournaments are also organized.

Narul Cricket Stadium Muzaffarabad is a spectacular ground with the capacity of 8,000 people. This stadium has hosted matches of Inter-District Under-19 Tournament, Blind Cricket Tournament and First Class Cricket Match. The Shrine of Hazrat Sain Sakhi Saheli Sarkar is located in Muzaffarabad. The Shrine has been a centre of religious activities and spiritual inspiration for the devotees since long. Sain Sakhi Saheli Sarkar played an unprecedented role in the reiteration of Islamic principles, in the region and dedicated his life for spreading peace, brotherhood and fraternity in the society.

The annual congregation (Urs) of the Saint is observed every year from January 13th to 21st with great solemnity. The Urs is attended by his devotees from Khyber Pakhtunkhwa, Punjab and Kashmir.

Khurshid Hassan Khurshid was the Private Secretary of Muhammad Ali Jinnah, the first Governor-General of Pakistan. He was sent by Jinnah to Jammu and Kashmir in October 1947. He was born on January 3, 1924 and died on March 11, 1988. His Mausoleum resembles to the resting place of Quaid-e-Azam.

The University of Azad Jammu and Kashmir was established in 1980, and it is at No. 14 in HEC ranking in General category of universities in Pakistan. It is a multi-campus, multi-discipline university, and has been making steady progress in both academic and administrative domains.it got colossal damages during the 2005 earthquake. The newly constructed buildings are equipped with modern facilities. Many research programs have been launched, however Institute of Geology is ranked 2nd in the country, which is based upon diverse field work and researches in Masters and Ph.D. programs. Lohar Galli is 9 kilometres away from Muzaffarabad. It is a place from where the famous curve of River Jhelum can be seen. It is a fascinating, eye-catching and magnificent sight.

Amidst Muzaffarabad to Kohala, a road bifurcate the highway and leads to Danna, crossing the labyrinthine roads. Danna is known for its healthy climate and alluring scenic beauty. A tourist rest house is available for accommodation. From here one can go to Dhirkot, a known hill station in District Bagh.

Peer Chinasi is on a hilltop, in the East of Muzaffarabad. It is famous for its scenic beauty, velvet green plateaus and wonderful climate. The view of the mountain peaks spellbinds the tourists. There’s a Shrine of a Saint Shah Hussain Bukhari too. The adjacent areas of Peer Chinasi, Phawna da Danna, Saran, Sun Bun, Muskhi, Sakki, Jarran and Peer Hassimar are worth-seeing and ideal for hiking, trekking and camping activities.

Peer Hassimar is a unique place with all its beauteous and fascinating natural landscape. Its elevation is 10,499 feet (3,200 metres) above sea level. It is accessible through Peer Chinasi. It is a popular hill-station which locates 40 kilometers (25 miles) in the East of Muzaffarabad city. It is accessible through an hour of journey, by a metal road. The tourist season starts from May to September, mainly depends upon the weather conditions. It is a cool and serene place; hence a perfect summer resort. Peer Hassimar is suitable for those nature-loving tourists, who would like hiking, trekking and exploration.

Langarpura is some 10 kilometres away from Muzaffarabad. It is the same place, where Satellite Town is going to be set up. The river Jhelum gets widens there to form a small lake, created by a landslide some years back. There is a small Angler’s Hut here, which makes a pleasant picnic spot. Boating is available out there on the river, which can be booked through the Tourist Department in Muzaffarabad.

Shaheed Galli is situated at the height of 1,640 meters above sea level. It is at a distance of 16 kilometers from Muzaffarabad, in the West. A 4 kilometer trek from Shaheed Galli leads to “Siri Kot” Meadows. It is mesmerizing place with breathtaking, fascinating and spellbinding with the serenity in the backdrop of the area. A tourist Rest House is available for accommodation at Shaheed Galli.

Patika is located at a distance of 19 kilometres from Muzaffarabad and is a gateway to Neelum valley. There is a Mini-Zoo and a fish hatchery. There is Picnic Point too. People come here to enjoy Desi (traditional) cuisines at Marco Polo Hotel. A Rest House of Tourism Department provides accommodation facilities to the tourists.