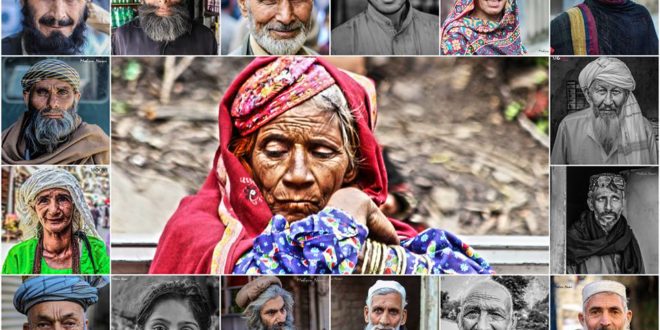 Stories of the Faces

Hundred Tales of a Human Face

Hundred Tales of a Human Face is an illustrated depiction of Syed Mohsin Raza. Sometimes we couldn’t describe anything in thousands of words, which a picture can tell in a single shot. This proves true when I saw Syed Mohsin Raza’s portraits at Moqvi Photography. I started following Moqvi’s Photography at once. A face in a portrait tells hundred stories, every time I see it. It is a work of Art, and it’s quite worth mentioning that I could see it around me as well. I would like to share a few glimpses with you people.

I started following portraits of Syed Mohsin Raza quite sometime back, because of a picture of an old man attracted my attention. His face tells hundreds of untold stories, and methinks, if nobody can read his face I could, with all its content, context and crux. There was a story of negligence by the family, relatives and friends. The immoral nexus of the cruel society and social injustices towards labor class; also the story of violent domestic issues. There was a story of human rights violation and discrimination; a story of inequalities of economic instability of the country. Then there was a story of gap between the human classes and a story of inhuman attitude of Government towards common masses.

Then I saw another portrait of a young boy. His face tells a lot of stories as well. It tells of inadequate, and insufficient necessities of life, which compelled him to work to make both ends meet. It tells that he might work from Dawn to Dusk to provide food and daily commodities to his family, medicines for his parents, school fee for his siblings as well as other prerequisites. Yes, I could feel the pain in his eyes, though his face is smiling.

There I could see the fragility and delicacy of womenlot in his portraits, which turns into their strength. The women of our homeland, who are often considered weak and vulnerable but when they come out in the field, they show their hidden powers and stamina. You can see a vast stamps of bitter realities of life experiences in their wrinkled face, yet the can still smile. What a valiant and bold act to challenge life; Come, Come,

How can I forget to mention the Transgenders, who were portrayed by Mohsin. This unique human-lot has its own miseries and misfortunes. They often face discrimination, prejudice, inequality and bigotry at the hands of so-called moral ethics of the society. This is the most neglected segment of the society, even more than that of the PWDs and often fellprey to the dual standards of the society.

I know someone says that it’s a common story in our society. Yes, it is but don’t we step forward to eradicate these contradictory compulsions? Why don’t we raise our voice to highlight the inequalities, injustices and sheer negligence.

Well Syed Mohsin Raza, you did and still doing, a great job, keep on excel with more powerful images, which depict, expose and reveal the true nexus of life. But I want a portrait of a PWD as well. I will always appreciate your efforts to portray a totally different exposure of life through yours camera lense.