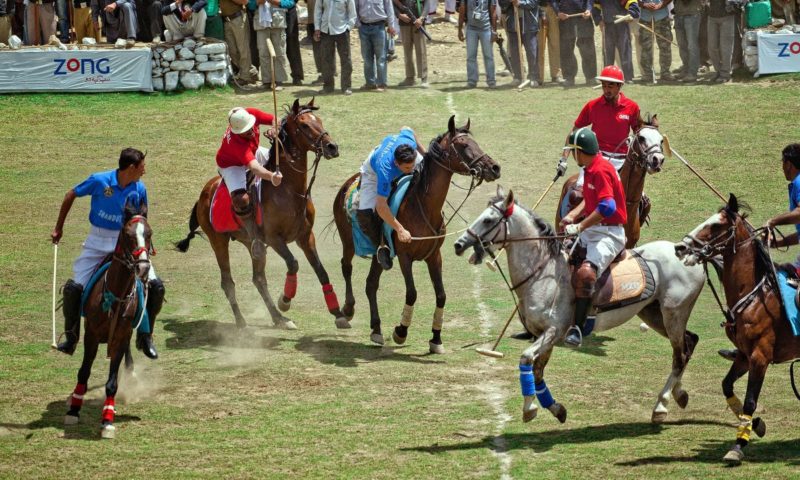 Pakistan has a rich cultural heritage with diverse and multi-ethnic charms. So many festivals give colours to its diversity and vibrant culture of Pakistan. Shandur Top is at the elevation of 12,200 feet (3,719 metres) above sea level. It is between Chitral and District Ghizer of Gilgit-Baltistan. It is popularly called as the ‘Roof of the World’. The Shandur Top is in fact, a flat plateau and it accessible by the end of April to the start of November. Shandur Pass is one of the major mountain passes of Gilgit-Baltistan, Pakistan. People who are living on both sides of Shandur Top, speak the Khowar language.

Shandur Polo Festival catches the attention quite a large number of visitors to experience the magnificent Polo Tournament in pure traditional style. It has been begun in 1936, and from there upon it is being held annually from 7th to 9th July, at the Shandur Polo Ground, on Shandur Top, Pakistan. This teams which play the Tournament are often Gilgit-Baltistan Polo Team and Chitral Polo Team. The festival includes Folk music and traditional dances other than Polo matches. A camp village set up to accommodate visitors when the Tournament starts. The game is played in its original form. The British were the patrons of the game, in the beginning.

The Kalash valley (also Kafiristan) consists of Rumbur valley, Bunboret valley and Birir valley in Chitral, Pakistan. Kalash is near Nuristan area of Afghanistan. The Kalash valley is the home of Kalash (wearers of the black rose), a primitive pagan tribe. It is an ancient tribe and have a unique religious identity and rich cultural heritage. General Salik Shah, who was called by the Greek as “General Sulfurous”, came with five soldiers of the legions of Alexander of MACEDON and settled in Chitral. They were the progenitors of the Kalash (Kafir) tribe. The Kalash are mainly famous for their numerous big and small traditional festivals. There is much dancing where the elders chant lyrics with drum-beating, whereas the women-folk keep on dancing around. They drink locally brewed mulberry wine in copious quantity. The Kalash People celebrate three main festivals in the year.J

This Festival is celebrated on 14th and 15th of May, to thank the Almighty for His uncountable blessings. They celebrate it on the arrival of spring season. They welcome the new season with new hopes and optimistic aspirations.

Kalash tribes celebrate Uchao festival, on 19th to 20th August, to pay homage to Almighty. They thank Him for the crops; especially for the grapes and other ripe fruits. They prepare wine, cheese, corns etc. and enjoy in Uchao festival with full zeal and fervour.

The people of Central and lower parts of Hunza valley celebrate the traditional “Ginani” festival, during 21st to 25th June, with traditional zeal and fervour. Two major gathering points are Altit and Aliabad villages. The local community performs the traditional rituals, at the main places and dance on the traditional on local music. A special traditional dish, Dirum Pitti, has been prepared to mark the festival. This is the carnival of Ginani and Chineer in Hunza, Strublah in Baltistan and Ganoni in Gilgit.

It is originally a Persian festival and they celebrate it to welcome spring season. The people of Gilgit, Hunza, Skardu and Chitral celebrate it as well, from 21st to 23rd March every year. They enjoy it with playing Polo, Football, Volleyball and Hockey matches. Traditional Folk dances and music is another attribute of this festival.

The Silk-Route festival is full of colours, dance, music and hues of cultural links. People celebrate it on the “Roof of the World”, while overlooking the beauty of surrounding natural environment, serene and green landscape, highest mountain peaks of the world, spectacular scenic beauty, wildlife, glittering glaciers, valleys with lush green foliage and fruits, clear water of gleaming and scintillating streams, rich ethnic diversity of people, folklore, arts and crafts and ancient cultural heritage, all await the tourists there for the celebrations of the Silk-Route festival.