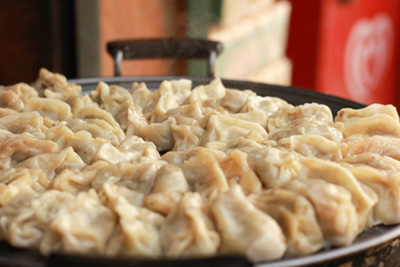 Then make balls with the dough and roll the balls to make a round Chapatti, with rolling pin. Put the ready-to-use mixture on the half circle of Chapatti and cover it with the remaining part of it. Press it gently with help of fingers and make a semi-circle Chapatti. Put the Chapshoro on the pre-heated Skillet or in Oven (Tandoor).

Chapshoro is the most delicious cuisine of Gilgit-Baltistan. They should service it with Sauce (Chatni), Raita, Salad or Ketchup and Soft Drinks to compensate its dryness.

It’s again is a dish they make during Nasalo and preserve it to consume later in chilly days of winter, especially as Baw-no. Gittey (Git: singular) more or less looks like sausages, made with the intestines of the animals, on the occasion of Nasalo/Nos. The ingredients consists of intestines of cow/sheep/ox/goat or mince meat for filling, wheat flour or buckwheat flour, salt, red crushed Chili, Coriander, Mint powder, water, Onion and cooking Oil.

For filling take wheat flour (buckwheat flour or mince meat), salt, red chilli, onion etc. and mix the ingredients in a bowl. In case of meat; cook it in cooking oil for 15 minutes and cool the mixture before using for the filling.

Clean the intestines carefully and properly. Fill the mixture into the intestines. When filling is completely done, tie the knot on both the sides, so that filling doesn’t spill out. The final step is to add salt, chop onion, mint, coriander powder etc. in water and make it to boil. Then put the intestines carefully and cook for 35-45 minutes. After cooking it, drain the excessive water and serve the gitty on a platter. You can serve it in slices too, alongwith the soup. Gilgity people usually preserve it for serving with other dishes, on special occasions like on the harvesting festival of Ganoni/Ginani. They use the leftover soup of the intestines in making another dish, Sharadi or Garma, but they don’t preserve it.

Tumuro or Wild Thyme is collected from the high mountains, surrounding Nagar valley. The herb has some really significant medicinal properties and it gives relief from headaches, calm the nerves and sooth the sore throats.

They prepare it with the Tumuro (dry wild Thyme), by adding the Thyme into a cetain quantity of water and bring it to boil. They let the tea boil for a few minutes, to extract the flavor from the leaves. Then they strain it before serving.

Mamtu or meat dumpling is a steam-dish, of mince meat of lamb or beef. They prepare it by mixing the meat with onion, chili and garlic. Then they put it on steam for several hours, on a multi-layer traditional steamer. It is a delicious and aromatic delicacy of the Northern Areas.

They prepare it by wheat, meat and butter. The dish takes several hours of continuous cooking and rich in protein. It’s tasty and full of aroma. They serve it on special occasions like weddings and festivals.

The people of Gilgit-Baltistan consider Sharadi or Garma, a health giving dish. They prepare it by kneading wheat, after making dough in thin pitas, they cook along-with china cabbage.

Sharbat is another energizing dish from Gilgit-Baltistan. The locals prepare it with wheat and butter. It is high in proteins and they serve it mainly during the wedding celebrations.

Chappati (bread) is a basic item of the breakfast in Gilgit-Baltistan. People take it in the mornings. It is made up of wheat flour, which remains in the Oven (Tandoor) overnight. They serve it after preparation in morning with the saltish tea.

Diram Fiti is bread, made from sprouted wheat flour, with its natural sweetness. The locals serve it with a mixture of butter, almonds or apricot oil.

It’s flat bread, which is made up of whole grain flour. It is rich in vitamin B-17 and the local people serve it with butter, spreading over it. They mainly prepare it on the eve of Ganoni and serve it in the breakfasts with the saltish tea. The people of Gilgit-Baltistan usually add salt in tea instead of sugar. In their opinion the tea becomes more savory, if ginger and black pepper is added in it.

For Go-lee, the ingredients are plain flour, eggs, salt, water (milk is optional), butter (homemade) and cooking oil. Mix flour, butter and salt. Whisk the eggs well and add into the flour. Add water and mix all the ingredients well. Grease the pan with cooking oil and spread the mixture on it. Flip it time and again; cook for 15 seconds. Then shift on the platter and spread butter over it. Serve hot.

Shopan is a traditional dish from Gilgit-Baltistan and particularly prepare on the occasion of Nasalo or No’ss (the death anniversary of the cannibal king of Gilgit-Baltistan, Shari Badat). It’s national dish of Scotland and they call it Haggis. The ingredients are stomach of sheep/goat or secum of cow/ox, mince meat (especially fatty meat gives it a rich taste), for the filling buckwheat flour, salt, red crushed chilli, coriander, mint, water, onion, cooking oil, chopsticks and thread to seal.

For the filling, mix the mince meat with salt, red chilli, chop onion, mint and coriander. The stomach or secum is thoroughly and carefully cleaned. For getting rid of the smell, marinate with lemon juice or vinegar overnight. Then fill the 1/3 portion of stomach or secum with the mixture, sew the stomach or secum with the help of chopstick and thread. Boil water with salt and put the shopan/joqeṣ̌ into it. Cook it for three hours and keep adding water on requirement. When it is done, drain the excessive water out and serve shopan/joqeṣ̌ on a platter. To serve the shopan, cut it into the pieces. The local people serve it with plain rice or with homemade wheat bread. Scots serve it with mashed potatoes.

The natives preserve it after cooking. The filling of the dish is of two types; buckwheat mixture or Joqeṣ̌, the mixture of meat and spices, Shopan. It’s name may vary in different areas of Gilgit-Baltistan and Shopan is a Shina word. The buckwheat mixture of Joqeṣ̌ requires the same ingredients and procedure as Gittey.

Previous: SKARDU – THE LAND OF MONARCHS
Next: SHANDUR TOP (PASS) In CHITRAL