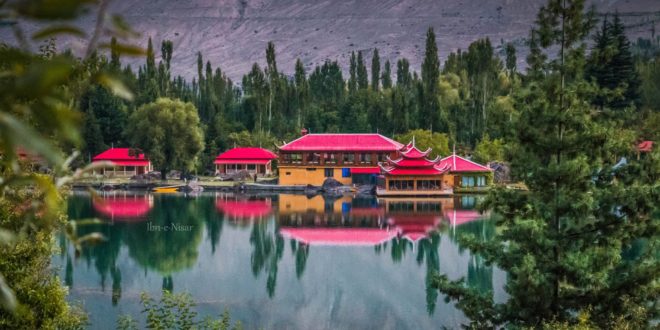 Shangri-la is a brainchild of the Brigadier Muhammad Aslam Khan (late), who was the first commander of the Northern Scouts of the Pakistan Army. It was the first-ever resort of its kind, on the sil of Gilgit-Baltistan in Pakistan. It on the side of the Shangri-la lake which also adorn the name of Lower Kachura lake. The altitude of the lake is almost 2,499 metres (8,199 feet) above sea level. It is 20-minute through drive from Skardu valley. The elevation of Skardu is 2,226 metres (7,303 feet) above sea level. In 1983 a distinct phenomenon happened while a plane crashed. Brigadier Muhammad Aslam Khan bought it, where he constructed Shangri-la Resorts.

The name, Shangri-la, was taken from a book entitled “Lost Horizon” which is written by James Hilton in 1933. In the novel, the Author narrates a tale of an Aeroplane which was crashed near a river, in the early 1920s. The surviving passengers came across some of the Buddhist Monks from a nearby temple and hence sought for their help. The Monks took them to a beautiful lamasery where they found a variety of fruits and flowers abundantly. The monks looked quite young, although they claimed to be hundreds of years old. The name of the place was Shangri-la. It is a Tibetan word which means “the Heaven on the Earth”. Shangri-la Resorts are famous al over the world and attract a large number of tourists from across the globe. It is such a unique picturesque site that the second highest peak, K2 (8,611 metres) of the world surrounds it. Moreover Deosai Plains which are the longest, the widest and the highest plateau in the world. In addition to it, the mighty river Indus which is the longest river of Pakistan, starts from the Ladakh valley and makes its way through the Karakorum and Himalayan Mountain Ranges. Its picturesque valleys, glaciers, thick forests enriched with rare species of the wildlife and historical monuments, dating back to the thousands of years.

Visiting the Gilgit-Baltistan and particularly the Shangri-la Resort is a lifetime experience which everyone wants to relive, again and again. It truly call “The Roof of the World” because of its higher surface elevating on more or less 2,499 metres (8,199) above sea level. It is popular as a fairyland due to its marvellous beauty and enchanting hill-site.