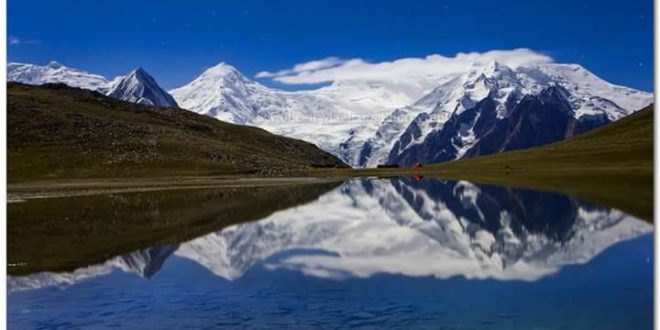 The Rush lake is a beautiful high altitude lake in Gilgit-Baltistan. It is near Rush Pari Peak at an elevation of 5,098 metres (16,726 feet) above sea level. Since it is on the height of 4,694 meters (15,400 feet), Rush lake is 25th most highest lake of the world. It is about 15 kilometres (9 miles) away from Nagar valley, in the North of Miar Peak and Spantik (Golden Peak). Rush lake and Rush Peak are reachable through the Hopper Glacier (Bualtar Glacier) in Nagar valley where as the Miar Glacier and the Phuparash Peak are aso in the way.

The trek towards the Rush lake in Gilgit-Baltistan, is very rough and tricky with continuous ascending and descending while climbing up. It is not everyone’s cup of tea to reach there. Only a few determined and adventurous people can capture it. Tourists can over look the Spantik Peak, Malubiting Peak, Miar Peak, Phuparash Peak and Ultarsar Peak from the lake. The trek to Rush lake starts from Hopper village, in the Nagar Valley. The journey from Aliabad to Hopper village takes about an hour. While reaching there, tourists can access some fine accommodation facilities. From Hopper village they can hire porters easily, who can carry the luggage up to 20-kg to the lake. Furthermore a guide is also required for the safe and convenient journey.

There are as many eleven camp-sites along the trekking route towards Rush lake and every site is at a distance of 1.5 to 2 hours of trekking. The fares of the Porters are determined by the Porters themselves. According to their camp-to-camp trekking fare, they can earn quite a handsome amount. The treks to the Rush lake and other further destinations are as follows:

The Rush lake is a hub for the Markhor hunters, which is called a Trophy Hunting. It is a very expensive activity and mainly foreigners could afford it. A licence is required for the hunting which is issued by the concerned authorities for the hunting. The lake remains frozen during the winters because the surrounding mountains and peaks remain snow-capped even in the summers. Only a few of the tourists can manage to reach to the heaven on the Earth in the winters. Harsh weather conditions, tough trekking treks and snowy roads make it nearly impossible to get there. A five-day trekking plan is sufficient for climbing up to the Rush Pari Peak basecamp. Though the trek is rough and tough, yet some of the patches are really picturesque and magnificent. After reaching at the lake, its mesmerizing beauty and splendeur, the tourists are alluring by the breath-taking scenery on such an elevation, which cannot describe in the words, but could feel only by heart. It is truly a heaven on the Earth. There is a piece of advice for the tourists to carry a plenty of water bottles, sufficient food. The preferable way is a tin packed food because cooking is a far-fetched idea in an unpredictable weather. Moreover a gas stove along-with cylinder, woollen clothes like jackets, mufflers, hats, pull-overs, gloves, socks etc. are a must. In addition to it carry a pair of hiking shoes, an extra pair of sleepers, an emergency light, and other essential gadgets for camping. They must carry all the toiletries and the necessary medicines as well.