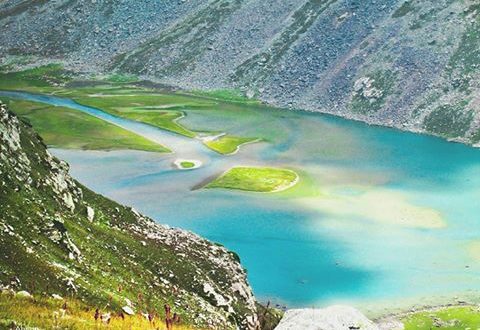 Fairy/Pari or Khapiro, all names are of the same lake, but locals call it Khapiro Dand. Google Earth shows only one big lake on the map but in fact there are two lakes; Fairy 1 and Fairy 2. Fairy 1 is the water source of the Fairy 2, but it is relatively smaller in size, as compare to the Fairy 2. A big stone-type wall separates both the lakes from each other and to reach Fairy 1 you have to cross Fairy 2, which takes almost 20 to 25 minutes of trekking.

To reach Pari or Fairy lakes, there two treks; one is from Kundol lake and other is from Izmis lake. Furthermore, there are two treks from Kundol, one starts before lake, on its right side of mountain, which is quite steep and challenging ascending, the other trek starts from Jabba Band after crossing 1.5 kilometres of distance from Kundol lake.

Jabba Banda is a beautiful meadow and an ideal place for camping. You will find a few shepherds huts there, on both sides of the mountain. From Jabba Banda there is a Pass, which directly descends you to Behrain. There is a small descending along-with camping site and a wooden bridge over the river. From there upon, you are on the trek of Fairy lakes and just have to forget the plain trek.

Continuous ascending starts from there. At the beginning, it is a gradual descend, within the boulders and then it turns into rocky ascent after a few hundred meters. The significant thing of this trek, which I like the most is, you will enjoy beautiful scenic view of the Kundol lake on half of the trek. Viewing Kundol lake from such height and in different shape helps to get over your fatigue. As Kundol lake disappears from the sight, you will be welcomed by the small waterfalls of Fairy lake, on whole trek up to the lake.

There is a small patch which will give you tough time to cross and remaining trek is steep ascending, with big boulders and pastures, where grazers take their livestock in summers, when fodder is scarce in plain areas.

As we planned to do camping at the lake and I was thinking on whole trek that there is not a single plain patch I could find on trek as yet, so possibly we would have been to camp around the lake. While thinking on this, I was ascending towards lake in between the group. Some of the friends, started asking how much more we have to climb this mountain. In this regard, I am thankful to the local people that I have learn one thing from them, which is a simple answer “bus thora sa aur reh gya hai” or “bus yeh samnay wali jagha hi hai” lol. It was the same strategy, I adopted there too.

At around 2 PM, I was in front of Pari/Fairy lake 2 and just amazingly thinking why it is named Fairy. The crystal clear water of the lake looks blue with mirror shade of the Sky. Suddenly sky started cover with clouds and I found the color of lake turns blacky. During deep thoughts to find out the reason for its name, our Guide and Porters reached with the luggage. Now we have to setup camps and arrange food.

Luckily we find space for camping and fixed 5 camps altogether. After setting up camps, I returned to the lake as it is located in the foothill of the tallest mountains of the area. The clouds hides the Sun behind them and water of lake was now dark black. The outcome of the whole research was the name Fairy might be because of its changing colors, with a blink of eyes. Locals believe that the place is abode of Fairies, where they bathe in cool, pure and crystal clear water of lake. Some of the locals even hesitate to camp there.
Now the next task was to prepare food and for this purpose, we have made arrangement of Gas cylinder but unluckily Daewoo Bus managment did not allow us to take it alongwith us. We had to arrange another one from Utror. But again we got a shocking news, after reaching there that they handed over an empty cylinder. Hence we asked the porters to fetch wood for cooking food. After efforts of an hour, they managed to gether enough wood for cooking.

After having green Tea and Noodles, everyone was fresh again. As the Sun already hidden behind the mountains, everybody was feeling cold as we were on high altitude of 4100 metres above sea level. First Aid kit is very important in such sitation on the trek, with basic medicines for altitude sickness, fever and pain killers.
In the morning, alongwith 2 friends, I visited the Fairy lake 1. I found out it smaller as compare to Fairy 2, yet with different colors of water. Swimming pieces of snow makes it more attractive to the eyes. After having breakfast, we started trek towards Izmis lake and one final ascentd of Fairy lake trek, which is again very steep with green pastures. After 35 minutes, we were on the top of the Pass descends toward Izmis. I will share the remaining details of the trek in other blog to come, as this was the technical part of the whole trek. The trek from Kundol is steeper as compare to Izmis side but Izmis offers a wonderful scenery of Kalam Banda, with chilling winds and it took us 5 hours to reach to the Izmis lake.

I am Aafaq Mahsud , Accountant by profession, Traveler,Trekker and Explorer by choice.